This page collects genetic information and raw sequence data that I have collected from my own DNA. Feel free to download for non-commercial use, but please acknowledge the source in any publication. Scroll down to find:

Looks like they took a detour to Bordeax. I wonder what made them leave? Use my personal access code FWJ66EJ3T3 at Genographic to explore the journey!

Since the mitochondrion is only inherited from your mother (and her mother, and her mother…) there is another unbroken lineage going back to Africa through a potentially different route. In fact, every little piece of my genome took a different path from Africa to end up in me!

Anyway, in order to find out where my maternal ancestors came from, I sequenced my mitochondrion. It’s only 16,569 nucleotides (or about five parts per million of the entire genome) so it shouldn’t be too difficult to do nowadays. My sister (who is a nurse) was kind enough to draw some blood from me, and from this I extracted my genomic DNA.

To determine my mitochondrial genome sequence, I aligned about 25,000 reads of 100 bp each against the Cambridge Reference Sequence (CRS) using Mosaik and then basecalled using samtools ‘pileup’. There is nothing special about the CRS other than that geneticists have decided to use it as the reference to which all other mitochondria are compared. Since the genome is so small, I then manually curated each call until I came up with a high-quality list of mutations.

The ones in bold are probably unique to my recent ancestry, but the rest are a perfect match to the U8a1a haplotype. It has been found previously only in Basque, Finnish and English persons, and has been suggested to be one of the ancestral lineages of the Basque going back all the way to the Paleolithic. At some point in time, perhaps around 13,000 years ago, populations around the Iberian peninsula probably migrated north as the ice sheet receded.

Here’s my mitochondrial genome, with differences from an (ancestral) African mitochondrion indicated: 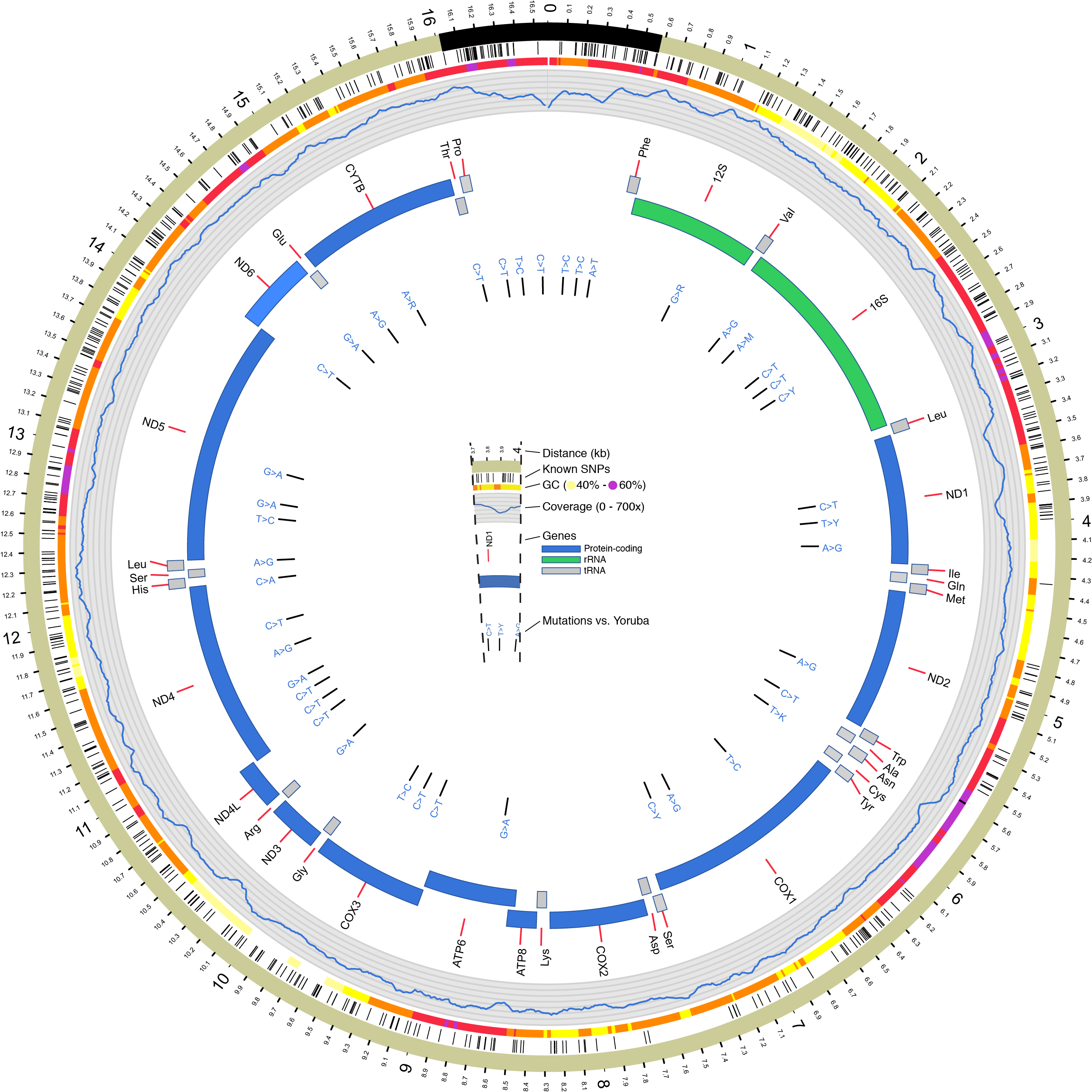 To find out more about the origins of my genome, and to see if I carried any disease genes, I genotyped 500,000 single-nucleotide polymorphisms (SNPs). These are small changes in the genome that are usually but not always benign, but can be used as markers to distinguish pieces of the genome and follow their inheritance.

This was then analyzed on the Affymetrix 500K SNP Mapping Array.

The dataset was derived from two arrays (StyI and NspI). For convenience, I have combined it into a single file, converted Affy “AB”-type calls into the actual alleles, and replaced Affy SNP ids by standard rs#.

To make sense of the data, I used Promethease to find SNPs associated with disease or other traits. The most important (according to SNPedia) findings were:

A lot of other hits came up, most of which seem dubious or pretty insignificant. I seem to have blue eyes (true!). Two different SNPs suggest that I should be taller than the average person (very true) – but they predict I should be about 0.4 cm taller than average, when it’s more like 20 cm. And I have some SNPs that predict male pattern baldness, although for my age I think I have plenty of hair.